DuPage County has been governed by Republicans since it was first organized in the 19th century. Voters in DuPage rejected Franklin Roosevelt four times. They voted for Barry Goldwater over Lyndon Johnson. Embracing a pragmatic, results-oriented conservatism, DuPage Republicans became the bedrock of the state’s GOP organization and dominated local politics.

Those days are over. Question is, what’s next?

One 2018 race in particular seems to encapsulate the dilemma facing Republicans not just in DuPage, but in historically Republican suburbs all over the US. State Senator Chris Nybo’s loss in what had been a heavily Republican district raises questions about the party’s prospects here. How can suburban Republican candidates hold their ground against the rising hostility toward their party from educated, affluent voters? Should suburban Republicans adopt a fortress strategy, hardening their right-wing rhetoric to raise aging white voter turnout, or is there another way to outlast this trend? Precinct-level results from Nybo’s district offer some insights, but questions remain.

In many ways, Chris Nybo is everything you could ask for in a DuPage politician. He’s smart, practical and honest. Though personally pro-life, he carefully downplayed the volatile subject. Strengthened by efficient constituent services, attuned to the pragmatic mood of the area, and insulated by a district drawn for Republicans, he had never faced a serious challenge outside a primary. In 2014 he defeated his Democratic opponent, Suzy Glowiak, by more than 20 points. However, even then there were warning signs.

Something remarkable happened in 2008. Barack Obama won DuPage County on his way to the White House. Then he did it again in 2012. One might write this off to a degree of hometown preference, but the trend intensified in 2016. Trump’s rise to the Republican nomination in 2016 stunned a DuPage GOP organization that had largely ignored him.

Two-thirds of DuPage Republican primary voters rejected Trump. Almost no one from the local party offered to serve as his delegate or aid the campaign. Trump’s subsequent victory in the General Election set off sirens in the suburbs. Hillary Clinton won DuPage County by an unprecedented margin, even winning the heavily Republican 24th Senate District. Trump’s general election numbers in DuPage barely topped his paltry primary performance there.

DuPage had been trending away from the GOP for a decade, but after 2016 the national Republican Party had, for the first time, become an existential liability for local candidates. No one had a plan to how to respond.

It should be noted that the county’s demographics have not changed in a politically meaningful way. Fifty years ago DuPage was dominated by affluent working white professionals and it remains so today. The number of black and foreign born residents has risen. However, starting from nearly zero, the recent “influx” has little political importance. In a metro area with a black population approaching 20%, African-Americans compose barely 5% of DuPage’s population. Whatever explains Nybo’s loss and the broader decline of the DuPage GOP, it isn’t rising racial or ethnic diversity.

In response to the events of 2016, Nybo prepared for the ’18 race by emphasizing his record of moderation and pragmatism. By contrast, other Republicans doubled down, embracing the right in an effort to sustain conservative turnout. Nybo lost while a few of the more conservative suburban Republicans won. Did Nybo pick the wrong strategy?

The numbers at the precinct level seem to suggest that Nybo was right. However, his push toward the middle gained too little profile and failed to distance him sufficiently from a toxic national brand. He very narrowly lost in 2018 to Western Springs’ Suzy Glowiak, the same opponent he’d trounced by 20 points in the last election. Here’s a look at the 2018 results in the 24th District at the precinct level with Republican majorities in red. 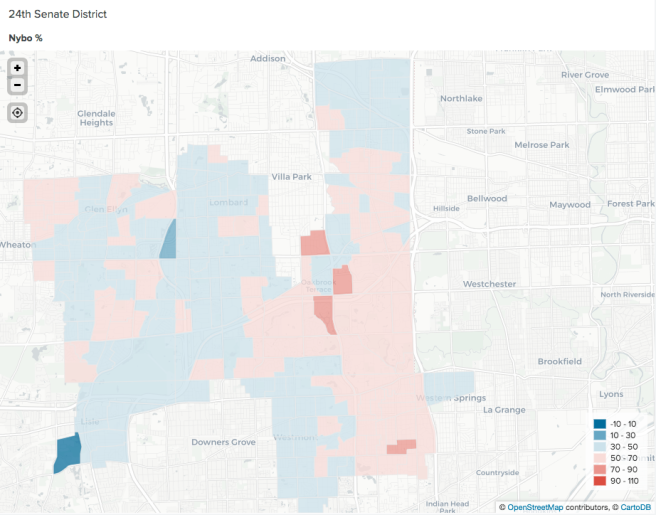 Note that Nybo lost much of the northern half of his hometown of Elmhurst, once a solidly Republican area. This is consistent with the general drift of the county toward the Democrats over the past decade.

The 24th Senate District spans two house districts, the 47th and 48th. The 47th covers the eastern portion of Nybo’s former Senate District, including Elmhurst, Oak Brook, Hinsdale and extending across the county line into Western Springs. This is the more solidly Republican geography. The 48th extends west across Lombard, Glen Ellyn and Lisle. Comparing Nybo’s performance to the outcomes in those districts might answer this question – would it be better for Republicans to steer right, or to distance themselves from the national party?

Neither of the two incumbent Republican House candidates inside the 24th made as much of an effort to claim the center as Nybo. Peter Breen in the 48th embraced an openness toward stricter gun regulations, but stuck with a very conservative anti-abortion position. He lost by a significant margin. Deanne Mazzochi in the 47th stayed close to Republican orthodoxy. She narrowly held her district while Nybo and Breen lost. Did her adherence to the party line help or hurt her performance? For clues, we can compare her performance to Nybo’s at the precinct level.

Mazzochi’s 47th District sits on the wealthier, (even) whiter, more-Republican eastern edge of Nybo’s former patch. Her results against Democratic opponent, Jim Caffrey, looked like this: 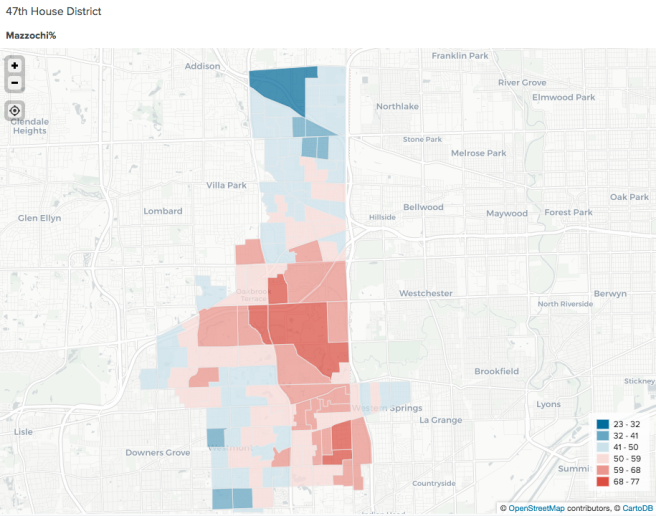 Breaking down precinct-level results, we can compare Nybo’s performance in precincts shared with Mazzochi against Mazzochi’s totals, and against both of their respective Democratic opponents. First, the precinct level results comparing Nybo’s vote totals to Mazzochi, with Nybo’s majorities shown in his preferred green, Mazzochi’s in yellow: 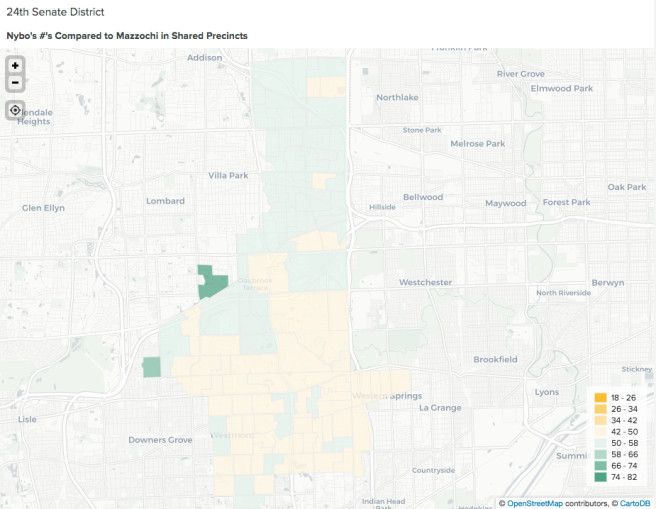 To get a sense of each of their popularity against a generic Republican ticket, we can compare their results against the GOP nominee for Illinois Treasurer, James Dodge, and against their Democratic opponents across precincts in the 47th House District.

In the precincts Nybo and Mazzochi shared, Nybo outpolled Mazzochi by a narrow 400+ vote margin. Mazzochi enjoyed a very small aggregate advantage in the most solidly Republican precincts while Nybo was slightly ahead of her performance in the least Republican areas. Both candidates outpolled the generic Republican, but only by a few hundred votes. Worse, the generic Republican in 2018 polled barely 45% in DuPage County, a sign of declining fortunes ahead. Neither Nybo nor Mazzochi managed to pull much support from voters who backed Democrats elsewhere on the ballot. Mazzochi, thanks to the favorable shape of her district, simply needed fewer of them.

A look at the precinct results makes it clear that Mazzochi won her race while Nybo lost thanks to the more Republican lean of her half of the 24th Senate District. A generic Republican would have won Mazzochi’s district while losing Nybo’s, with similar margins. Nybo didn’t get far enough away from the GOP brand to pick up many independents and Mazzochi failed to rev turnout by sticking close to the party.

Considering the remarkably poor performance of Trump in the ’16 election in DuPage and the growing opposition that has since emerged, potential Republican candidates (especially incumbents), have nothing to lose and everything to gain from openly-stated dissent. Trump is unpopular here even among Republicans.

In fact, a Republican who positions themselves at odds with the national party might provide cover for the rest of the party’s local candidates, while setting themselves up as an untainted leadership figure when this moment passes. That’s a tough choice to make, but as the tide turns it may be the only shot Republicans have to remain relevant in the collar counties. If no Republican makes a vocal anti-Trump stand while there’s still time, the party at large risks an historic wipeout.

It would, of course, make far more sense for the local party organization to take that step of open dissent. This would make life easier for their candidates and increase their odds of longer-term competitiveness. That’s unlikely to happen, not because it’s a bad idea, but because of the harsh dynamics of organizations. Too many people would have to summon too much courage. They are going to wait it out hoping some unforeseeable events rescues them. As a consequence they’ll probably be swept away by the tide.

Is this trend toward the Democrats in the suburbs merely a blip? Will the pendulum swing back toward the GOP? Amid the insanity of the Trump Era, you can never say never. However, a look at the back and forth in Lake County’s 10th Congressional District seems to suggest an answer.

That district changed hands every two years in a ping-pong series of tight races, until one year it didn’t. Clinton won in that formerly competitive district by almost 30 points and Brad Schneider in ’16 regained his seat for good. Republicans failed to recruit a serious challenger in ’18 and Schneider ran away with a thudding victory. It is unlikely that Republicans will run another credible challenge in that now-blue suburban district.

National Republican rhetoric is dead on arrival among educated white voters of working age, the cohort that has always set the tone of the DuPage County electorate. Nothing on the horizon suggests a shift by national Republicans away from their appeal to Dixiecrats and aging rural whites. Absent a major national pivot, local Republicans in places like DuPage, Orange County, and suburban Philadelphia’s face some stark choices. Break very visibly with the policies of the national party, or watch their historic Republican strongholds, and their careers, disappear.

Special thanks to Splunk for the free data analytics software and the DuPage County Election Commission for election data.

This site uses Akismet to reduce spam. Learn how your comment data is processed.